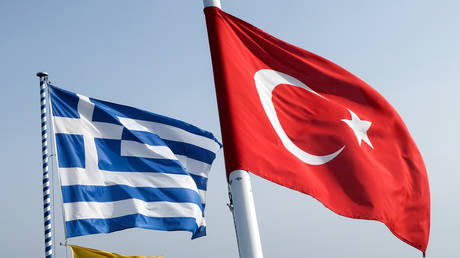 Ankara has been criticized by the US State Department for restarting hydrocarbon exploration in contested waters. Washington said the move “deliberately complicates” de-escalation talks between NATO allies Greece and Turkey.

Coercion, threats, intimidation, and military activity will not resolve tensions in the Eastern Mediterranean. We urge Turkey to end this calculated provocation and immediately begin exploratory talks with Greece. Unilateral actions cannot build trust and will not produce enduring solutions.

On Monday, the Turkish exploration vessel, Oruc Reis, returned to sea to continue carrying out exploration activities in the waters south of the Greek island of Kastellorizo until October 22. News of the vessel’s redeployment drew condemnation from Athens.

Greece and Turkey had only last week settled on dates to renew “exploratory talks” over the ongoing dispute concerning the Eastern Mediterranean region, and to discuss “confidence building measures.”

However, on Tuesday, Greece’s minister of state told national radio that there would be no exploratory talks so long as the Oruc Reis survey vessel remained in contested waters. “Turkey is the side trying to establish a status quo using violence and threats,” he added.

The Greek Foreign Ministry had already described the development as a “major escalation,” while other European counterparts have weighed in to support Greece. Earlier in October, the EU claimed it would continue to punish Turkey if it maintained its exploration activities in the disputed waters.