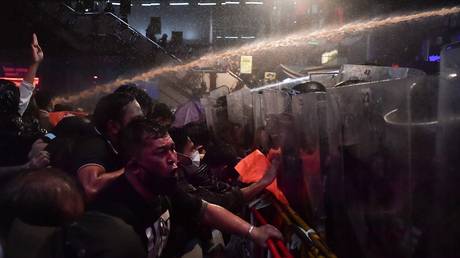 Thai police gathered in force on the streets of Bangkok, deploying water cannons to disperse anti-government protesters who had assembled in the capital in defiance of an emergency decree banning large gatherings.

The crowd chanted slogans calling for the release of jailed activists, while shouting abuse at Prime Minister Prayut Chan-O-Cha.

Eyewitness footage from the scene shows large deployments of heavily armed riot police throughout the city, as well as water cannons being used to disperse the demonstrators.

It was the second day of protests amid wider and growing anti-government sentiment in recent months, and an unprecedented challenge to the country’s long-standing monarchy. Protesters pushed back against police lines, hurling bottles and other projectiles, while defending themselves with umbrellas.

More than 40 protesters were arrested amid a government crackdown this past week. They were detained for their role in the ongoing protests, which call for a new constitution, an end to the monarchy, and the removal of Prayut.

The prime minister is a former military ruler, whom critics accuse of interfering with a general election last year to maintain power as a civilian.

Meanwhile, two men have been charged with attempted violence against Queen Suthida, whose motorcade was surrounded by protesters. If convicted, the men face a possible death penalty.

“We are particularly concerned about the application of serious charges, including the crime of sedition, against individuals for peacefully exercising their fundamental rights,” said Ravina Shamdasani, a spokeswoman for the commissioner.

Also on rt.com
High-profile activist arrested for ‘violence against the Queen’ after protesters heckle royal motorcade in Thailand (VIDEO)