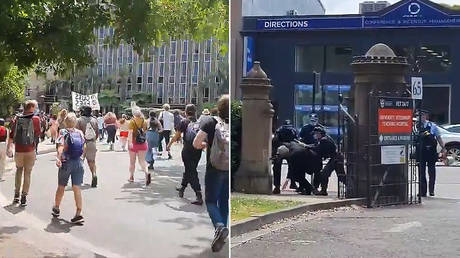 A law professor at the University of Sydney was observing a campus protest as part of his legal research but, despite not being part of it, the scholar was violently thrown to the ground by police. He was then arrested and fined.

Multiple students and university staff members were arrested on Wednesday, along with Professor Simon Rice, during the hundreds-strong protest against controversial education reforms and funding cuts by the government.

The university’s student newspaper, Honi Soit, managed to obtain the footage of police dispersing the gathering. It shows several people, including Rice, being “roughly forced” to the ground by officers.

Honi Soit’s other videos show an organized march that featured dozens of students moving through the streets of Sydney.

However, during an encounter with the police the same crowd can be seen running away en masse.

After an excellent speech by a beautiful Honi Soit editor at the NTEU teach our, students gathered and sprinted down Eastern Avenue to avoid police capture pic.twitter.com/EljFwO7gXz

Following his arrest, Rice told Guardian Australia that he was a mere onlooker at the demonstrations. “I have a bunch of students who are working on reforming protest laws. I told them there is a protest today and you may want to watch. I also chose to watch.”

The professor said that police “kicked his legs from under him” and pushed him back down whenever he tried to get up. He called law enforcement’s overall response to the student demonstration “disproportionate force” and “completely unjustified.”

Rice revealed that he had been arrested and fined $1,000 for breaching Covid-19 restrictions on public gatherings.

A University of Sydney spokesperson responded to the incident, saying they would be raising “serious concerns” with the New South Wales Police Force over its use of force.

Law-enforcement officials have yet to comment on the incident.