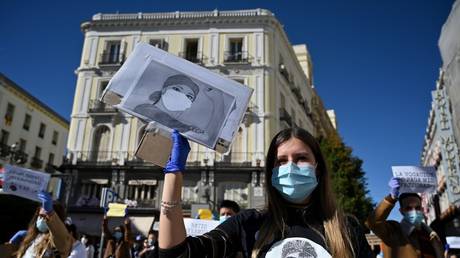 Hundreds of nurses gathered in Madrid on Monday, marking Spain’s national holiday with a protest against poor working conditions. Health workers have repeatedly complained of poor safety and job insecurity during the pandemic.

As Spaniards celebrated Columbus Day, the city of Madrid entered a state of emergency. The order was issued by the Spanish government on Friday, and will see residents of the capital barred from leaving the city, and even outdoor gatherings restricted to groups of six, in a bid to stop the resurgence of Covid-19.

However, hundreds of nurses gathered in Puerta del Sol square in defiance of the restrictions, pleading with the regional government to improve their working conditions.

Holding signs and placards, they demanded a pay rise, more hires, and an end to zero-hour contracts, as well as an end to unspecified “abuses” and “threats” they have allegedly faced at work.

“We are suffering from continuous and growing violations to our social rights,” one protester told RT’s video news agency, Ruptly. “Abuses, threats, job insecurity, poor management, and all of this affects the quality of the care we provide to our patients.”

Monday’s demonstration isn’t the first time they’ve taken to the streets since the coronavirus pandemic began. Back in April, as Spain recorded the highest number of infected healthcare workers in the world, nurses and other essential workers staged an online campaign, taking to the streets in Madrid a month later to demand more protective equipment and an improvement in workplace conditions.

Nurses weren’t the only protesters who took to the streets on Monday. A small group of demonstrators held a car rally in the Spanish capital to protest the new lockdown measures in a gathering organized by populist party Vox.