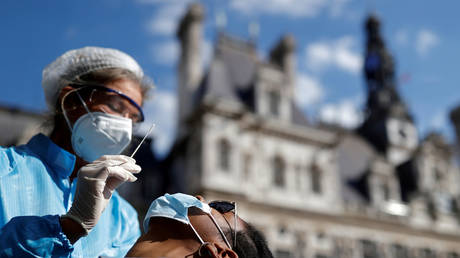 France’s government has declared a public health state of emergency over the growing number of Covid-19 cases as the country sees a second-wave surge of the virus. A curfew will also be imposed on several cities, including Paris.

In a statement on Wednesday, the government said that the coronavirus epidemic needed to be strictly counteracted, due to its growing scale putting the health of the population at risk.

The statement did not list any specific measures the government intends to implement, but the mere adoption of the state of emergency gives a broad range of statutory powers to the executive.

In a televised interview later on Wednesday, President Emmanuel Macron described the situation as “worrying” and revealed plans to impose a 9pm-to-6am curfew on residents of several French cities, including Paris, Lille, Grenoble and Lyon. The nightly restriction starts on Saturday and will last four weeks, he added.

Anyone out during the curfew will need to have a good reason for being out, Macron said, and breaches could result in fines of up to €1,500.

The president ruled out a national lockdown, saying it would be disproportionate.

France is one of the European countries worst hit by the Covid-19 pandemic. It has registered more than 700,000 confirmed cases of the novel coronavirus and over 33,000 deaths. Since August, the epidemic has been on the rise again in the country.

On Wednesday, French health officials reported that the number of people receiving hospital treatment for Covid-19 had surpassed 9,100 for the first time since late June, while a further 22,951 confirmed cases were reported for the previous 24-hour period.