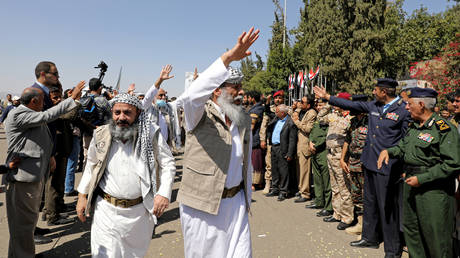 The Saudi-led military coalition in Yemen and the Iran-backed Houthi movement have kicked-off an operation that will see over 1,000 prisoners returning home, the International Committee of the Red Cross (ICRC) has confirmed.

A total of 1,081 prisoners will be exchanged, in the largest swap deal since the UN-brokered peace talks in December 2018, which later stalled. The ICRC noted the process involves ICRC-operated flights into and out of several cities in Yemen and Saudi Arabia, in line with the accords reached last month in Switzerland.

According to the ICRC, the release of 484 former detainees has already been accomplished, as at least five planes carried people between several Yemeni and Saudi airports throughout Thursday.

Also on rt.com
Britain ‘broke own rules’ by failing to inspect factories making bombs for Saudi Arabia’s war in Yemen

The massive prisoner-swap operation comes a day after two US hostages, and the remains of another one who died while held captive by Houthis, were released in exchange for 200 Yemenis stranded in Oman after receiving medical treatment there.

During the UN-brokered negotiations in Stockholm in 2018, Yemen’s government and Houthi rebels agreed to swap some 15,000 detainees as part of a peace deal, but have only conducted minor prisoner exchanges since then.

After a new agreement was struck in Switzerland last month, UN envoy for Yemen Martin Griffiths said it was a “very important milestone” in the conflict. He called on the parties “to move together towards a negotiated solution to bring lasting peace to Yemen.”