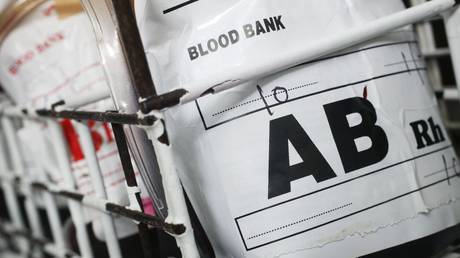 A person’s blood type could play a key role in their vulnerability to Covid-19, with type O people less likely to catch the bug while types A and AB are most at risk, freshly released research has found.

Two independent studies published on Wednesday found that blood type O is something of a security blanket when it comes to coronavirus. Those with this blood type were found to be less likely to catch the disease and also had a reduced risk of suffering severe complications if they do get sick.

However, people with types A and AB were not so lucky, as scientists found that they were more likely to suffer more severely than people from the other two blood groups (O and B). Blood groups are defined by their numbers of antigen and antibody proteins. Type O is the most common across the world.

One of the studies was carried out by a team of researchers from Odense University Hospital and the University of Southern Denmark. They compared Danish health registry data from over 473,000 people who were tested for Covid-19 to a control group of more than 2.2 million from the general population.

By parsing through the trove of data they found that there were fewer positive results among those with blood type O than their peers in the other three blood groups, where rates of infection were found to be similar.

“We have the advantage of a strong control group,” Lead author Dr Torben Barington of Odense University Hospital said. “Denmark is a small, ethnically homogenous country with a public health system and a central registry for lab data. So our control is population-based, giving our findings a strong foundation.”

The second study involved 95 people who were critically ill with Covid-19 in Vancouver, Canada. It discovered that patients from the A and AB blood groups were more likely to require mechanical ventilation, suggesting that they had greater rates of lung injury from the virus. They were also more likely to require dialysis because of kidney failure.

The scientists also found that people with blood types A and AB remained in the intensive care unit (ICU) for longer on average than people from the other two blood groups. The Canadian team said this may also signal a greater Covid-19 severity level.

Lead author Dr Mypinder Sekhon, of the University of British Columbia, said: “Of particular importance as we continue to traverse the pandemic, we now have a wide range of survivors who are exiting the acute part of Covid-19, but we need to explore mechanisms by which to risk stratify those with longer-term effects.”