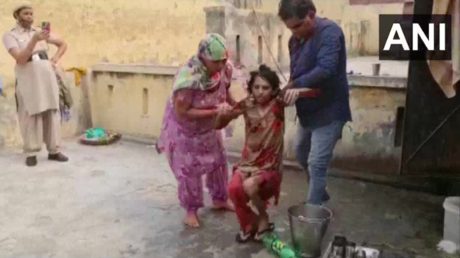 A woman who was held captive in squalid conditions in a nine-square-foot outdoor toilet by her husband for 18 months has been freed by local authorities in India.

The horrific incident took place in Rishpur village in the northern Indian state of Haryana.

The unidentified, 35-year-old mother-of-three was rescued by police and welfare officers on Tuesday having been discovered in a malnourished and weakened state. The woman was periodically starved and denied water for days at a time by her captor.

A woman in Haryana’s Rishpur village of Panipat district was locked in a toilet by her husband for over a year. She was rescued by a team of district women & child welfare department officials. pic.twitter.com/Y4jBak9MBd

“She was so weak that she could not even walk,” the district’s women’s protection officer, Rajni Gupta, said. “She ate eight chapattis when we gave her food.”

Her husband, Naresh Kumar, who maintains his innocence, claiming his wife suffers from severe mental illness, was arrested at the scene by police. He could not provide any evidence to support his claims.

The pair have been married for 17 years and have three children together between the ages of 11 and 15.

The woman was hospitalized before being left in the care of her cousin while police investigations into her horrific ordeal continue.

Also on rt.com
WATCH: Indian policeman DRAGGED on hood of moving car for 400 meters after trying to stop driver