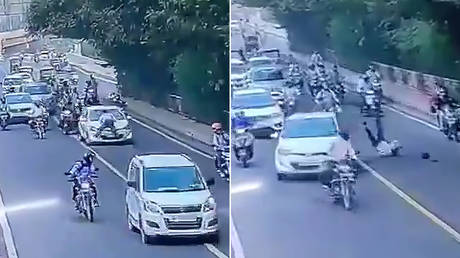 A Delhi traffic police constable held onto the hood of a car and was dragged 400 meters after he tried to stop its driver and then jumped on the vehicle in an attempt to avoid being knocked down.

The action-movie-like footage of the incident went viral on Thursday, after the policeman, Mahipal Singh Yadav, performed the daring maneuver on Monday evening in the Northern Indian city of Delhi.

In the video, captured by CCTV cameras, the constable is seen being dragged on the bonnet of the car, as the driver zig-zags along the road apparently in a bid to shake Yadav off. The rogue motorist eventually succeeds when the policeman falls from the car after a sharp jolt.

Yadav said that the driver initially slowed down, but when the constable approached him, he suddenly accelerated. “I fell on the car bonnet in a bid to escape being run over and grabbed on to the windshield wiper,” the constable recalled, according to the Hindustan Times.

Yadav added that he “repeatedly” asked the driver to stop, but instead he proceeded to drag the lawman “for 300-400 meters.”“He sped away after I fell off the bonnet,” Yadav concluded.

The driver was identified as a Delhi resident by the first name of Shubham. He has been arrested for rash driving, assault and “criminal force to deter a public servant from performing duty.”