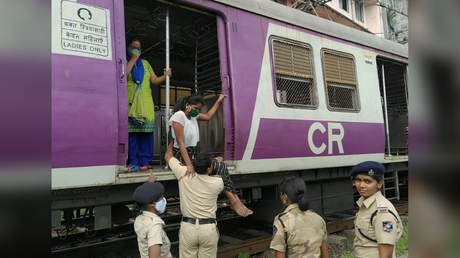 Officials have promised to carry out a full investigation after the city of Mumbai, India lost power, bringing trains in the region to a standstill. The blackout lasted for around 3 hours, according to reports.

Hospitals and other critical infrastructure were able to use emergency backup generators, but the outage caused chaos for the city’s commuters. Photographs show train passengers sitting on platforms and waiting patiently in stranded train carriages for the power to be restored.

Mumbai’s Central Railway, one of 18 zones of Indian Railways, published photographs of security personnel helping commuters exit suburban trains that stopped mid-route. In a tweet, Central Railway urged passengers not to panic and not to block the train tracks as they wait for services to be restored.

Mumbai: Commuters seen waiting at Mulund Station as train services are disrupted due to power outage after a grid failureBMC says, “it will take 45 minutes to 1 hour to restore the power supply.” pic.twitter.com/Dwjq4el7Hc

With a population of 20 million, Mumbai has around seven million train passengers every day, although public transport has been scaled back following the coronavirus pandemic.

The city’s two stock exchanges, as well as Mumbai’s international airport, did not experience any problems. However, online exams being held by Mumbai colleges were postponed due to the power outage, local media reported.

Maharashtra chief minister Uddhav Thackeray ordered a probe into the blackout and instructed his government to ensure that the outage doesn’t affect emergency services in the city.

Mumbai residents reported that the power was out for around three hours, although electricity was restored in some areas faster than others.