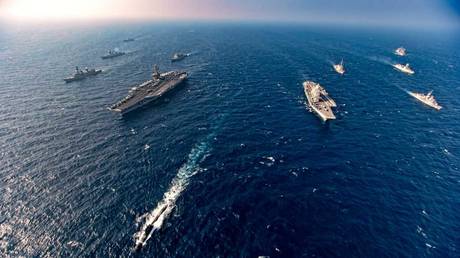 The Quad partners have kicked off part two of their naval drills with warships, including one of the world’s largest military vessels, gathering in the North Arabian Sea to showcase their capabilities in a four-day joint exercise.

The two aircraft carriers, along with other ships, submarines and aircraft will take part in the four-day long naval exercise which includes cross-deck flying operations and advanced air defense exercises.

MIG 29K fighters from the INS Vikramaditya along with F-18 fighters and E2C Hawkeye from the USS Nimitz are the main airborne assets on show.

The USS Nimitz is the largest warship in the world by displacement, but also the oldest serving aircraft carrier in the world. The nuclear-powered carrier was launched in 1972 and remains an integral US naval asset.

“The Nimitz Strike Group team is grateful to join our Australian, Indian, and Japanese partners and increase our readiness and interoperability,” said Rear Adm. Jim Kirk, the commander of the Carrier Strike Group.

Indian MoD accounts have published images of the drills on Twitter.

Footage of Tuesday’s naval exercise also shows the giant USS Nimitz in the middle of the flotilla.

Part one of the Malabar exercise took place from November 3-6 in the Bay of Bengal and saw the allied navies undertake a number of complex drills, including anti-submarine and anti-air warfare operations.

Also on rt.com
Warships from Australia, Japan & US thunder into Indian Ocean for ‘Quad’ drills amid rising China tensions

The Malabar exercises first took place in 1992 as drills between the US and Indian navies. Australia hadn’t taken part in the naval drills for 13 years until this year, while Japan only started permanently participating in 2015.

The renewal of this Indo-Pacific partnership is seen as a response to what the partners consider to be China’s increasingly aggressive stance in the region.