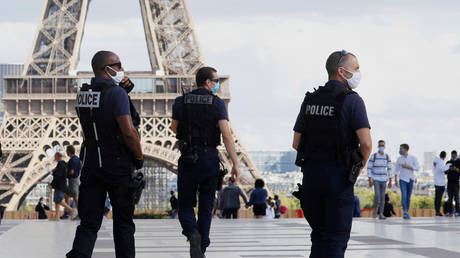 Thousands of law enforcement personnel will be deployed in major cities across France to monitor compliance with strict measures adopted to contain a second wave of coronavirus.

Interior Minister Gerald Darmanin announced on Thursday that 12,000 officers would be used to enforce curfews in metropolitan areas when they come into force starting on Saturday. However, police will not be used to shut down gatherings larger than six people if they are held on private property, the minister said.

He warned that those caught ignoring the curfew would face a €135 ($158) fine, which could balloon to as much as €7,500 ($8,771) – and lead to a six-month prison sentence – for third-time violations. Residents in affected areas will have to carry documents to show they are traveling to work or carrying out other ‘essential’ activities.

Also on rt.com
‘No more slackening’ – French PM says local lockdowns could continue at least until the end of 2020

French President Emmanuel Macron unveiled new rules for Paris and eight other cities on Wednesday, including a curfew from 9pm until 6am. In total, around 19 million people will be affected by the new restrictions.

Areas of the country that will not be placed under curfew will also see tighter restrictions, including a prohibition on private parties and even weddings.

The new rules are slated to last for a minimum of four weeks and could potentially be extended if parliament signs off on the move. Paris and many other cities in France have been declared “high-risk” zones, requiring bars to shut down.