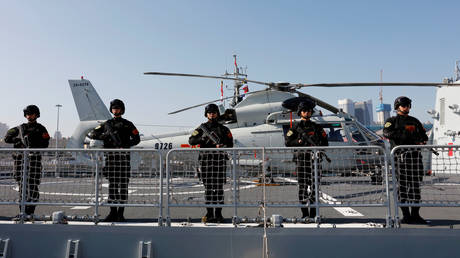 Beijing has slammed the United States for seriously undermining stability in the Taiwan Strait after a US Navy destroyer sailed through the waters. Washington claims the USS Barry had been conducting a “routine transit.”

The Eastern Theater Command of the People’s Liberation Army (PLA) said China’s military had followed and monitored the USS Barry on Wednesday.

“We sternly urge the US to stop making trouble-stirring statements and moves,” said a spokesperson, Senior Colonel Zhang Chunhui. “The command forces are always on high alert in resolutely safeguarding national sovereignty and territorial integrity, as well as peace and stability in the Taiwan Strait.”

The US has been frequently sending the wrong signals in recent days to “Taiwan independence” forces, seriously damaging peace and stability in the region, Zhang stressed.

The US Navy described its actions as a “routine Taiwan Strait transit.”

According to Taiwan’s defense ministry, the USS Barry sailed in a northerly direction through the strait, and the situation was “normal.”

Taipei says Beijing has recently ramped up air force activity near Taiwan, as China on Wednesday condemned reports of Washington’s new sales of advanced weaponry to the island.

China’s state-run People’s Daily newspaper wrote Thursday that “people across the Straits don’t want to go to war, but if war breaks out, the culprit will be the secessionists.”

The commentary added that the use of force would not target compatriots in Taiwan, but “the interference of external forces and the very small number of ‘Taiwan independence’ separatists.”

On Wednesday, Chinese President Xi Jinping visited a marine corps base in the Guangdong province. He was reported as telling soldiers that “we must put all our minds and energy into preparing for war, and maintain a state of high alert.”