Limit for contactless card transaction to be raised, RTGS to be made 24×7: RBI governor

RBI expects positive growth in second half of 2020-21 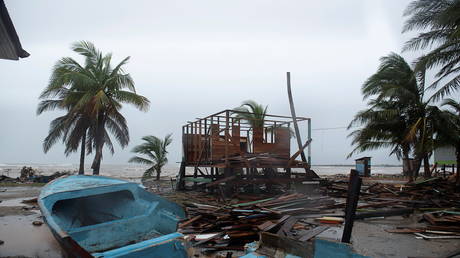 Hurricane Iota has hit Nicaragua, tearing roofs off buildings and mowing down trees as authorities order evacuations. Forecasters say it could be deadlier than Hurricane Eta, which killed more than 170 people this month.

The hurricane has made landfall near the town of Puerto Cabezas in northeastern Nicaragua as category 4 with winds of 155mph. It then quickly intensified and was upgraded to “catastrophic” category 5.

The National Hurricane Center in Florida warned that Iota’s “extreme storm surge” could produce a life-threatening impact with “destructive winds and potentially 30 inches of rainfall.”

Reports by local media said that strong winds tore the roof off a hospital in Puerto Cabeza and did the same with corrugated metal sheets on houses.

Evacuations were conducted in Nicaragua and neighboring Honduras. The Nicaraguan military posted photos of its soldiers distributing aid and helping with the evacuations.

There were no immediate reports of casualties.

Nicaragua is still reeling from the widespread destruction brought by category 4 Hurricane Eta, which ripped through Nicaragua, Guatemala and Honduras just two weeks ago, killing more than 170 people across the region and leaving many homeless.

Iota came ashore just 15 miles south of where Eta arrived on November 3, and is expected to cause even more damage than its predecessor.