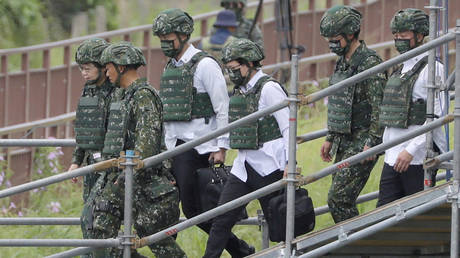 China has threatened to make a legitimate response amid reports of US moving forward with new sales of advanced weaponry to Taiwan.

The Foreign Ministry in Beijing said on Tuesday that a “legitimate and necessary” response will follow further US arms sales to Taiwan. The United States should immediately halt all weapons sales to Taiwan, ministry spokesman Zhao Lijian told reporters.

China resolutely opposes the US plan to sell three weapons systems to the island, Zhao said. The response will depend on how the situation develops, the spokesperson added.

The White House recently sent notifications of the three pending deals on advanced weaponry with Taiwan to Congress for approval, sources said Monday. The notifications were for a truck-based rocket launcher, long-range air-to-ground missiles, and external sensor pods for F-16 jets, according to Reuters. The State Department did not confirm the proposed defense sales.

Taiwan’s president, Tsai Ing-wen, said on the weekend that the island will continue modernizing its defensive combat capabilities “to deal with military expansion and provocation from the other side of the Taiwan Strait.” She warned that “as we procure military hardware, we still remain dedicated to promoting our national self-defense capabilities.”

Taiwan’s military reported on Sunday that Chinese Y-8 anti-submarine warfare aircraft made sorties along the disputed strait throughout the weekend, as the island celebrated National Day.

Arms sales to the island of Taiwan “seriously harms China’s development interests and security,” Beijing’s state-run Global Times daily wrote in late September. However, it stressed that whatever the island of Taiwan buys, “one or two pieces of weapons can’t change the power imbalance” between the mainland and Taiwan.