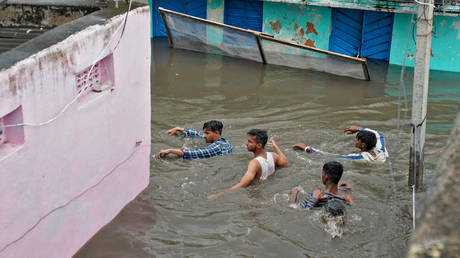 Torrential rains have paralyzed daily life in the capital of India’s southern Telangana state, Hyderabad, causing a number of fatalities amid severe flooding and destruction. Neighboring Andhra Pradesh has also been hit hard.

Hyderabad, populated by over 6.8 million people and home to some of the country’s major IT companies, has seen more than 25 cm (nearly 10 inches) of rainfall over the past 24 hours, according to authorities.

The downpour is the heaviest rainfall witnessed in the city in the last 100 years, experts said.

It has led to flooding in many parts of the capital, making main roads unusable and causing chaos.

At least 15 people lost their lives in Hyderabad, with several more fatalities reported in other parts of Telangana state. In neighboring Andhra Pradesh state, at least 10 people have died due to the heavy rains, according to local media reports.

On Tuesday night and throughout Wednesday, locals posted videos showing flooded streets and their waterlogged homes. Amid the deluge, a wall collapsed in the capital, with boulders crashing down on residential homes. That incident left nine people dead, including a two-month-old child.

Meanwhile, rescue operations are being carried out both in the city and surrounding areas, with the army and National Disaster Response Force (NDRF) jointly participating in evacuation efforts.

The city authorities declared a holiday on Wednesday and Thursday, urging residents to stay indoors to avoid further casualties, as more rain is expected in the state over the next two days.

Today at 11.30 hrs found one family about 15 persons got stuck up in one house at moosa nagar due to floods (musi river overflow), I along with Sri K Subbi Ram Reddy Insp SBZR & other staff immediately proceeded to the Chaderghat bridge and rescued a pregnant lady, small kids. pic.twitter.com/XmMH646yrQ

Outside the city, the foul weather caused serious damage to rice paddies, to corn and cotton fields, as well as to other crops.

Prime Minister Narendra Modi and President of India Ram Nath Kovind have tweeted their support to residents of the devastated city and to local authorities.

Spoke to @TelanganaCMO KCR Garu and AP CM @ysjagan Garu regarding the situation in Telangana and AP respectively due to heavy rainfall. Assured all possible support and assistance from the Centre in rescue & relief work. My thoughts are with those affected due to the heavy rains.

Heavy rains often lead to the collapse of buildings and other structures in India’s major cities, where infrastructure remains in dire need of upgrading, especially in low-income areas.