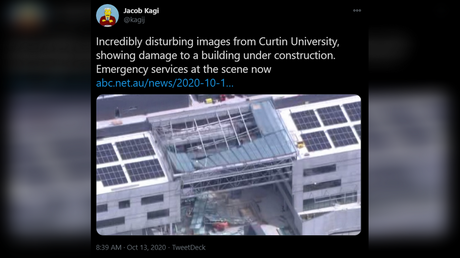 At least one person has been killed after a roof collapsed on the campus of Curtin University in Western Australia. Several injuries have been reported as emergency workers search through the rubble for survivors.

A glass ceiling caved in at a construction site located on the premises of the Perth university on Tuesday. Firefighters and paramedics are at the scene and have begun to look for victims.

At least one person was killed in the collapse, with several others reportedly injured, one critically, local media reported. An ambulance service confirmed that it had transported two men in their 20s who sustained “multiple injuries” to a nearby hospital.

Aerial photographs and video footage show a huge hole in the building’s glass roof, as emergency workers sift through the debris.

Aerial pictures from the news chopper – appears to be much more than a wall collapse. Glass ceiling has caved in at a new construction area. pic.twitter.com/E5HsyrGOgE

One person is believed to be dead and others are injured after a building collapsed at the Curtin University campus in Bentley this afternoon. More to come on 7NEWS throughout the day and in 4 & 6pm. #7NEWSpic.twitter.com/t9vYBoCcSS