OnePlus launched its much-hyped OnePlus 8T smartphone on October 14. The smartphone came with an all new design, a flagship processor, quad rear cameras, 120Hz display, 65W Warp Charge technology, and all the bells and whistles except wireless charging and an IP-rated dust and water resistance – OnePlus claims that the OnePlus 8T is dust and water resistant. The phone is the OnePlus’ latest offering and has been priced quite competitively at Rs. 42,999 onwards. It was probably the best Android offering at its price. Today, however, Xiaomi has heated things up a bit for the OnePlus, in less than a day after its much-hyped OnePlus 8T was unveileed at a virtual launch presentation. 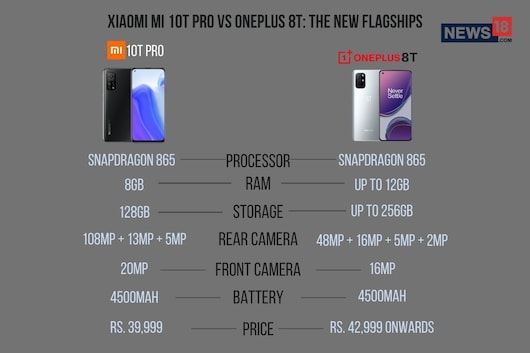 The OnePlus 8T features a 6.55-inch full-HD+ Fluid AMOLED display with a 120Hz refresh rate and a hole-punch cut out for the front camera. The Mi 10T Pro, on the other hand, comes with a 6.67-inch LCD display with up to 144Hz refresh rate. The Mi 10T display uses an Intelligent AdaptiveSync technology that optimises the refresh rate according to the content on a users’ screen. Both smartphones use Corning’s Gorilla Glass for protection.