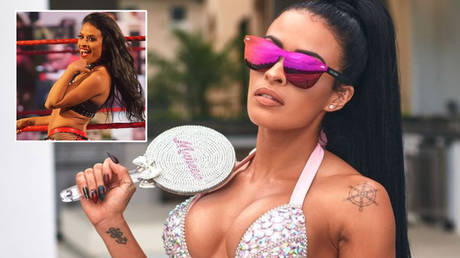 A WWE pin-up who had more than a million fans on Instagram has been showered with support after being fired for setting up an OnlyFans account, offering fans the chance to buy her outfits and pay a subscription for racey photos.

Hugely popular star Thea Megan Trinidad, who was part of SmackDown and challenged for the Raw Women’s Championship title under her Zelina Vega alias, was released by WWE after three years because of her decision to continue with her highly lucrative online platforms.

Those included an account on gaming site Twitch that has more than 50,000 followers and, more recently, a new account on OnlyFans, which is used by thousands of models to release content to fans on a paid subscription basis.

Working under the name Megan Minx, Trinidad charges subscribers $30 a month for services including revealing photos and videos of herself in cosplay costumes, bikinis, lingerie and swimsuits.

Followers who “tip” her extra are given priority when Trinidad replies to their messages, and her admirers are also given opportunities to spend hundreds of dollars on photosets.

WWE bosses took a dim view of the account, which is thought to have conflicted with a new contract stipulation for wrestlers that requires “talents to acquiesce control” of accounts on third-party platforms or face punishments from the organization.

Trinidad described her time with the WWE as “incredible”. “I would have never have been able to say ‘this is for you dad’ if certain people did not believe in me,” she wrote on Twitter, inviting a deluge of support from outraged readers. “I love you all and I couldn’t have done it without your support.”

Shortly before her departure was announced, the 29-year-old had tweeted a message saying “I support unionization”, later responding to a message from the SAG-AFTRA labor union praising a “powerful conversation” with Trinidad, adding that their aim was to help wrestlers “protect and empower” themselves.

I want to say thank you all very much for the last 3-4 years @WWEUniverse, it was incredible. I would have never have been able to say “this is for you dad” if certain people did not believe in me. I love you all and I couldn’t have done it without your support 🙏🏽 pic.twitter.com/R4fI9r64Vm

“Very powerful indeed,” replied Trinidad, causing one fan to react with a playful meme of WWE boss Vince McMahon looking alarmed. “Thank you all for the pleasant conversation and insight.”

Trinidad’s Instagram account, which had more than 1.1 million followers and included WWE in the title, appeared to have been abruptly closed down, but the New Yorker is understandably pressing on with her other growing accounts, where she has made reference to “simps” – a term often applied to desperate men.

“I love you and will support you wherever you go,” one fan told her, while others suggested she could sign for rival promotion All Elite Wrestling.

“There’s more to you than just beauty. Now your talents will shine brighter than a star above the Alamo.”

Others voiced their support for WWE. “Oh good god,” rued one. “Vince treats his wrestlers good, he just wants full control of his brand.

“If it wasn’t for Vince, she would still be working 25 bucks a match on the independent circuit or having her checks bounce.”

Another said: “She obviously wanted to be fired or was going to be fired which is why she sent it. Wrestlers need to read what the sign on their contracts.

“It’s their fault: at the end of the day, these wrestlers wouldn’t have these fans and platforms to make more money on the side without WWE.”

She obviously wanted to be fired or was going to be fired which is why she sent it. Wrestlers need to read what the sign on their contracts. It’s their fault: At the end of the day, these wrestlers wouldn’t have these fans and platforms to make more money on the side without WWE.

Sports journalist Dave Meltzer told a radio show that wresters had been told to delete certain accounts on platforms by a set date.

“During that timeframe, Zelina Vega didn’t get rid of it and she opened an OnlyFans account,” he said.

“The backstory on this is that there are a couple of women that are making more money with their social media than they are making with WWE.

“One of those was Zelina Vega. On her Twitch, she’s making a lot of money and so it’s like, what do you do in that situation?

I feel like this entire event has done nothing but fuel a fire and motivate her more.She’s doing great with Twitch, and I’m sure there are plenty of wrestling companies calling her already.

Thank you for your bravery, leadership, and strength through all of this

“I think she made her choice and they had to fire her. Right before it got out that she was fired she made a tweet about how she supports unionization, which she has said before.”

Trinidad is far from the first female fighter to admit that their online profile is at least as financially successful as their sporting career recently.

Before she was released by the UFC, MMA poster girl Paige VanZant revealed that her Instagram page, which often contains scantily-clad photos of her and has attracted more than 2.7 million followers, helped her to make “way more money sitting at home posting pictures than she did in her sport.

“If I were to stop everything I do outside of fighting and just fight, I would be at a loss financially by a long shot,”said VanZant, who recently insisted to eager fans that she would not be creating an OnlyFans account in the foreseeable future.

Quarantine rules in Australia, decision to send Rohit Sharma back to NCA in focus as time runs out for Tests | Cricket News