Who blinked first? McGregor may have agreed to January fight date, but relationship with Dana White and UFC is souring — RT Sport News 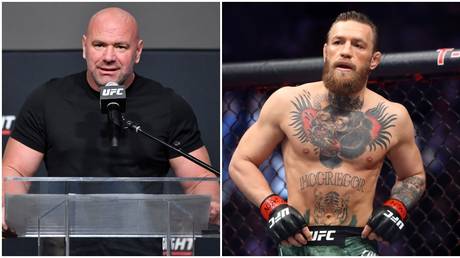 The protracted and verbal disagreements which were evident as Conor McGregor attempted to engineer his UFC return before the end of the year suggest that he and Dana White could be headed for a collision before long.

The former two-weight UFC world champion confirmed late on Wednesday, if indeed confirmation was required, that his short-lived (third) ‘retirement’ from mixed martial arts had come to an an end, and that he had ceded to White’s request to fight Dustin Poirier on January 23 – and not the November or December date that McGregor had vocally campaigned for.

In seeking his return to the Octagon, McGregor had outlined that he expected the fight with Poirier to take place in 2020, but White – who has previously moved mountains to accommodate his prized pay-per-view commodity – dug his heels in.

Events in November and December, he said, were already booked. Each already had two title fights at the top of the card. If McGregor was added, it would require other fights to be moved and that is unfair to the fighters whose training had already begun.

I accept, Jan 23rd is on! My goal is to see this fight take place in Cowboy stadium. Proper Style! Jerry Jones is a friend and the stadium can hold our crowd. I will be ready for Texas and Texas will be ready for my fans! Then Manny. #McGregorSportsandEntertainment

It is perhaps cynical to suggest that ‘fairness’ isn’t often at the forefront of fight promoters’ minds, but it is a statement more true than it’s not. If White had thought that McGregor was truly unavailable in January, it is hard to imagine that his position wouldn’t have softened.

What is no doubt irking McGregor is that he has been campaigning for a return to the octagon for several months now. He even went so far as to post screengrabs of conversations with White to social media to prove his point – something the UFC president reacted furiously to, describing it as a violation of the ‘man-code’ and “one of the dirtiest things you can do.”

This seems a far cry from the giddy, beetroot-red Dana White who accompanied McGregor on press tours to promote the fight with Floyd Mayweather, or the guy who wore an Irish football jersey and restrained Jose Aldo from taking back his own world title which had been grabbed by McGregor at a media event in Dublin.

Also on rt.com
‘One of the DIRTIEST things you can do’: UFC boss Dana White fumes after Conor McGregor leaks message exchanges (VIDEO)

Let’s be clear: it could have easily been arranged to add McGregor to one of the fight cards taking place before the end of the year, as was his stated desire. At least one of the title fights could have been delayed by a month or so, so long as a little sweetheart payment was made – but the UFC’s broadcast deal with ESPN dictates that there must be a certain number of high-profile fights on their platform per year, and there are no fighters more high-profile than Conor McGregor.

Even with the McGregor-Poirier fight now practically agreed, another gauntlet was laid down by the Irishman: his desire to have the fight take place inside the Dallas Cowboys stadium in Texas. The UFC have long considered holding an event in the world famous arena but probably not while there is a global pandemic on the go. Still though, it appears that battle lines have been drawn for McGregor and White to bicker even further.

In the end though, perhaps McGregor was swayed to accept the January deal by being told that he would forced to share his PPV revenue with other headliners if he fought in December, or maybe he was truly convinced by White that a January date on ESPN was the only move – but with all clearly not rosy between the two, it looks as though White’s days of bending to McGregor’s every whim are long gone.