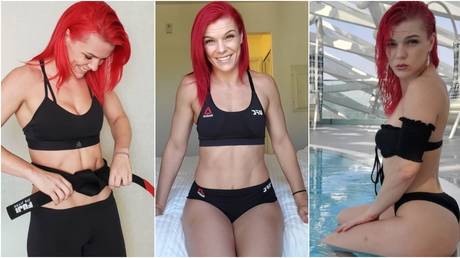 Robertson earned her fourth submission victory when she beat Cortney Casey in June, which took her beyond Ronda Rousey and Rose Namajunas as the woman with the most submission wins in UFC history.

“To see that I’d broken Ronda Rousey’s record was absolutely mind-blowing to me because I feel like she’s just a pioneer for women in this sport,” she said in a press conference ahead of her fight with Poliana Botelho at Fight Island on Saturday. “That was a really huge step for me.

“It’s really just the beginning. I look at Charles Oliveira, he has 14 – I’m trying to break that record.”

‘Savage’ made Casey tap out with 24 seconds remaining of their flyweight clash in Las Vegas.

“No matter what, I’m always looking for the kill,”she added. “It just depends on how long it takes me to get there.”

The 25-year-old revealed her delight at being able to make a living through fighting, but it’s clear she has plenty of ambition for her time in the sport.

After all, “the belt’s always the goal,” the No. 15-ranked flyweight added.

Robertson has already accomplished one of her career goals during her time in Fight Island, as she was awarded a much-coveted black belt in Brazilian jiu-jitsu by her coach Din Thomas.

“It was 100 percent unexpected,” she said. “My first day out of quarantine here in Abu Dhabi, Din texted me, he’s like ‘come up to my room I have something to give you.’

“I went up there and he surprised me with that. I kept my cool for a second there and then I was walking through the hallway just sobbing with a blackbelt in my hand after.”

Asked if the belt would be the highlight of her trip whether she wins or loses against Botelho, she said:

“Yeah it probably is. That’s up in the list of accomplishments of making it to the UFC and then the next would probably be the title shot for the belt.

As for Botelho, the Canadian is expecting a tough fight on Saturday but believes she has a blueprint for victory.

“I’ve watched her over the years and I believe that she’s gonna come out strong and hard and fast,” she said. “She always throws everything into every single punch and kick, and that’s why she has a lot of TKOs and knockouts.

“But I feel like it’s a perfect matchup for me, honestly. If you look at the Cynthia Calvillo fight, it’s pretty much exactly like my exact game plan.”

Calvillo submitted the Brazilian via a rear-naked choke – the same finish Robertson has employed in three of her five UFC wins – when they met in 2018.

Botelho, who is 8-2 in MMA, has fought just once since, and that was in April last year as she bounced back with a victory over Lauren Mueller.