Freelance pay back to pre-Covid levels 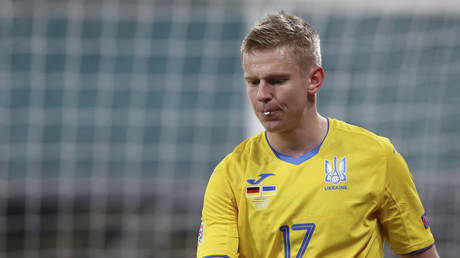 Vile trolls reacted to Ukraine and Man City winger Oleksandr Zinchenko’s mistake against Germany in their UEFA Nations League match on Sunday by wishing death upon his family, the player revealed in a heartfelt Instagram post.

Zinchenko had been the source of pride and amusement after he was filmed zealously celebrating and kissing a reporter during a TV interview after Ukraine secured their place in the Euro 2020 tournament by winning their Group B in October last year.

It was the latest notch on Ukraine’s upward trajectory through the world footballing ranks, mirroring a surge in national pride in the sport. At the end of 2019 Zinchenko was named Ukrainian football of the year for his efforts in securing their Euros berth in the same year he won a Premier League and FA Cup double with club side Manchester City.

However, the two-time Premier League winner has been subjected to vile abuse from his own fans after they pinpointed the full back’s loss of possession when 1-0 up away to Germany in their Nations League match on Sunday, albeit in the opponent’s half, as the catalyst for Der Mannschaft’s equalizer, and subsequently going on to win 3-1.

Despite manager Andriy Shevchenko being forced to leave out 12 players due to coronavirus for the match at Red Bull Arena, Ukraine took the lead in Leipzig through Roman Yaremchuk in the twelfth minute and all seemed rosy for The Yellow and Blue. But Zinchenko, his country’s current best footballer, turned villain a little over ten minutes later.

Zinchenko’s loss of possession in his opponent’s half gave way to Germany to initiate a counter attack which resulted in a goal from Leroy Sane to equalize, in turn gifting the home side momentum which they utilized to go on and win the game with a brace from Chelsea’s Timo Werner on either side of half time.

The 3-1 loss means that Ukraine sit in third place in the table, behind ‘Der Mannschaft’ in top spot and Spain in second, and ahead of only Switzerland in Group D with just one game left to play against the Swiss on the final matchday.

After the defeat, trolls on social media reacted angrily to Zinchenko’s loss of possession, laying the blame for the result solely at his boots, some going as far as to wish death upon his family. The former Ufa player reacted to the threats on his Instagram account, in which he addressed the nation’s “few civilized supporters” to get behind the team for their crunch final match.

“Reading all this filth, which has been dumped on me and my family after yesterday’s match, I’m once again convinced of the kind of people we are and of their ability to support,” Zinchenko wrote to his one million followers on Instagram.

READ MORE: ‘She is a MASSIVE fan’: Manchester City star Zinchenko interrupts his WEDDING DAY to defend wife over criticism of boss Guardiola

“I feel responsible for the defeat myself, and I call upon our civilized supporters, of which unfortunately remain only a few. A final now awaits us all [against Switzerland], get behind the team,” the 23-year-old said, after which he made his account private.

After the match, national team manager and legendary Serie A striker Andriy Shevchenko went some way to explain away Zinchenko’s mistake, by revealing to press that the player was substituted against the Germans as he had received an injury in the first half of the match, despite replacements being limited to the loss to the squad numbers.

“We played practically with one lineup. At the end of the game we made substitutions, based on the result and the upcoming game. We needed to give players a rest considering Zinchenko and Malinovskiy had injuries. They could hardly finish the game,” Shevchenko, a two-time Champions League winner with AC Milan, informed.

Also on rt.com
‘Everyone should make love all night!’ Oleksandr Zinchenko celebrates wildly as Ukraine qualify for Euro 2020 finals (VIDEO)