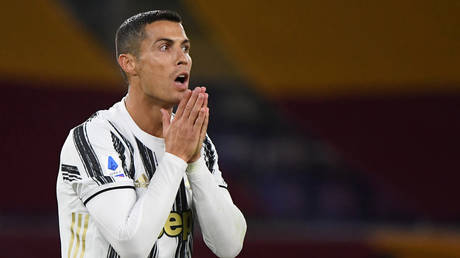 Fans have flooded Twitter with get well soon messages – and no shortage of memes – for superstar footballer Cristiano Ronaldo after news broke that he had tested positive for coronavirus.

The Portuguese Football Federation announced the news on Tuesday, revealing the Juventus star is asymptomatic and has left Portugal’s squad to enter isolation.

The news came less than a day after the Selecao captain posted a photo from a packed team dinner.

However, none of his teammates have tested positive, having undergone new tests after Ronaldo’s came back positive.

“Didn’t realize goats could catch coronavirus??? WHO lied to us,” another quipped.

Didn’t realise goats could catch coronavirus??? WHO lied to us.

Others expressed concern for Paris Saint-Germain star Kylian Mbappe, who shared an embrace with the forward during Portugal’s 0-0 draw with France on Sunday.

Likewise, Mbappe’s France teammate Eduardo Camavinga took home the Juventus star’s shirt from the UEFA Nations League clash and had pledged not to wash it.

Following the news, other fans questioned the decision to proceed with international football given the current situation.

One argued it “needs to get banned asap,” while another added: “Still don’t know who thought it was a good idea for players to jet all over the world for internationals during a pandemic.”

It was even suggested that UEFA postpone European club football by a month, too.

At this stage, they shouldn’t even play the Champions League and the Europa League for a month.It takes Cristiano Ronaldo for people to realise it – they might not have, you never know.

Ronaldo’s required self-isolation means he will miss Juve’s UEFA Champions League clash with Dynamo Kyiv next Tuesday, as well as Saturday’s Serie A match with Crotone.

The Bianconeri are due to host Barcelona and Lionel Messi in the Champions League on October 28, so he’ll hope to be able to feature then.