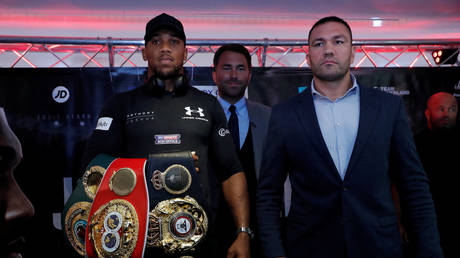 Kubrat Pulev has faced accusations of racism online after he made reference to the color of heavyweight boxing rival Anthony Joshua’s skin.

The pair are expected to face off in December, with the Pulev the mandatory IBF challenger for Joshua’s WBA, IBF, WBO and IBO heavyweight belts.

The Bulgarian was asked about Joshua’s strengths ahead of their fight, to which he responded: “His strengths? I’d say he has a very powerful punch undeniably.

“What are his other strengths? His tan is better than mine.”

A number of fans took a dim view of Pulev’s comments, variously describing his words as a  “shameful 1970s comment” and “100% racist.”

“This kind of comment has no place in today’s world,” added another commenter. “Whether it was meant with the intent or not it can still be construed as a sly racist innuendo. Think before you speak or type, people are individuals and everybody takes things differently.  No place for this in the world.”

This kind of comment has no place in todays world. Whether it was meant with the intent or not it can still be construed as a sly racist innuendo. Think before you speak or type, people are individuals and everybody takes things differently. No place for this in the world 🥊🥊🥊

Others are hoping to see Joshua get his revenge on ‘The Cobra’ in the ring.

“I hope Anthony Joshua smashes the living daylight out of Pulev after that ‘tan’ comment,” said one, while another added: “Should be fined half his purse money for that comment, knock him out AJ.”

Pulev is no stranger to controversy or crossing the line of acceptability.

Last year, the 39-year-old had his boxing license suspended by the California State Athletic Commission (CSAC), was fined $2,500 and ordered to take sexual harassment prevention classes after he kissed Vegas Sports Daily reporter Jennifer Ravalo on the lips without her consent during an interview following his win over Bogdan Dinu.

Pulev had dismissed the incident on social media and claimed the pair were friends.

However, Ravalo refuted his comments and said they had only met for the first time when she interviewed him at the weigh-in ahead of the fight.

She also said the heavyweight “grabbed both of my buttocks and squeezed with both of his hands” and that his actions were “disgusting” and she “felt humiliated.”

Pulev is 28-1 in his career, with the only defeat coming against Wladimir Klitschko in 2014.