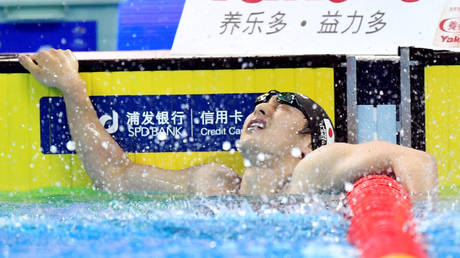 Japanese swimming star Daiya Seto has been suspended for the rest of the year by the national swimming federation, which has penalized him for having an extramarital affair.

The 26-year-old is not allowed to take part in any competition until the end of the year after breaching the federation’s standards in sportsmanlike conduct.

The body announced its verdict during an extraordinary meeting on Tuesday, imposing severe sanctions on Seto, who will, however, be eligible to compete at next summer’s Tokyo Games.

The reigning 200m an 400m individual medley world champion resigned as Japan’s team captain in the wake of the scandal, which has shattered his reputation in his home country.

Japanese Olympic swimmer Daiya Seto has been suspended for the rest of the year, for breaching the Japan Swimming Federation’s conduct after being involved in an extra marital affair. He will however remain eligible to compete in next year’s Tokyo Olympics.Image: EPA-EFE pic.twitter.com/pcKBlaJiu9

He also agreed to cut ties with corporate sponsor All Nippon Airways Co, at the airline’s request.

“How can I apologize? I have been asking myself if I can, but I think my apology is to continue swimming, restoring the trust of my family, who have been deeply hurt by my irresponsible behaviour,” the athlete said, admitting to having had an extramarital affair.

“I would like to seriously face swimming with the determination to start over so that my family and everyone will recognize me as a swimmer again. I’m really sorry,” he added