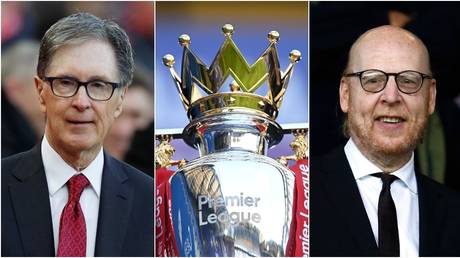 According to its proponents, ‘Project Big Picture’ is a bold bid to save English football’s lower leagues amid the ravages of the Covid-19 pandemic – but its true motives are much more cynical and power-hungry.

Details of the proposal – which is being spearheaded by Liverpool’s American owner John W. Henry and Manchester United chairman Joel Glazer, also of the United States – were published in The Telegraph on Sunday.

The project promises to do a great deal for the English Football League, including a £250 million ($325 million) payment up front and a 25 percent cut of the Premier League’s annual revenue – up from the 4 percent that teams lower down the footballing pyramid currently receive.

Parachute payments would also cease, which could help level the playing field in the lower tiers by removing the advantage handed to those relegated from the league above.

EFL chairman Rick Parry has described Project Big Picture as being “in the best interests of the game as a whole,” and the proposal does indeed come at a desperate time for clubs below the Premier League, who have taken an enormous hit as a result of the pandemic.

Leyton Orient chairman Nigel Travis – who has also backed the proposal – said some EFL clubs could cease to exist within five or six weeks.

But looks can be deceiving, and even a cursory glance at the deeper caveats of the project reveal a self-serving plan which is merely masquerading as a desperately-needed lifeline for the lower reaches of the English football pyramid.

The details of the proposal – which came on the heels of Friday’s announcement that fans will have to pay an extortionate £14.95 pay-per-view fee for every game they want to watch in October that has not been selected for broadcast, after Premier League clubs spent £1.3 billion in a transfer market – are a reminder of the greed and cynicism that reign supreme at the top of the English game.

Currently, every Premier League club has one vote when it comes to deciding policy, with a majority of 14 votes needed for a change to pass.

United and Liverpool are proposing that be scrapped.

Instead, they and seven other clubs – the remainder of the so-called ‘Big Six’ of Chelsea, Arsenal, Manchester City and Tottenham Hotspur, plus Everton, Southampton and West Ham United – would hold all the voting power, with a majority of six from those nine required.

The Premier League would also be reduced from 20 clubs to 18 – but the Championship, League One and League Two would remain at 24 apiece, so two clubs would lose their EFL status – while the Carabao Cup and Community Shield would be binned.

For all the good that would come to the EFL under Project Big Picture, it would come at far too high a price, and the fingerprints of Liverpool and United’s US owners can be found all over this opportunistic attempt to seize power.

The granting of special status to the ‘Big Six’ to reinforce their stranglehold over the top flight is reminiscent of the “locked-in” model that pervades American sports leagues.

Big teams aren’t at risk of relegation to a lower tier, while those below can’t rise through the ranks to challenge those at the top – everyone knows their place.

Under the proposals, the ‘Big Six’ would even have the power to veto potential takeovers, allowing them to prevent wealthy new owners from transforming the fortunes of other clubs, ironically like Sheikh Mansour did at Manchester City. Under the new plans, City could block ‘upstarts’ such as themselves from ever challenging at the top table.

Whether billionaire ownership is good for football is a separate discussion in its own right and more scrutiny should undoubtedly be placed on those looking to buy clubs, but it would be an enormous conflict of interest for those decisions to rest in the hands of rival clubs.

The proposed move to a more American way of operating is yet another reminder of how out-of-touch football club owners are, and Henry and his Fenway Sports Group are no exception at Anfield.

Liverpool pride themselves on their reputation as being a club of the people whose socialist values are ingrained in their decision-making, but FSG badly misread the situation early in lockdown when they attempted to furlough almost 200 workers.

The club swiftly reversed the decision following a huge backlash from fans, but the damage was already done.

As for the Glazers, they saddled £540 million of debt onto United – who were previously debt-free – when they took over in 2005, and their takeover has reportedly since cost the club “more than £1 billion in interest, fees, refinancing penalties and other dead money.”

At the same time, the team has – aside from a UEFA Europa League trophy, FA Cup and EFL Cup – largely floundered since Sir Alex Ferguson retired in 2013, with just three top-four finishes in the last seven seasons.

The prospect of them wielding increased decision-making power at the top of English football hardly inspires confidence.

Although Arsenal were not one of the driving forces behind the creation of Project Big Picture, they also stand to be among the key beneficiaries and they too have made questionable moves under owner Stan Kroenke, who also owns no fewer than seven US-bases sports and esports teams.

The Gunners announced in August they would make 55 staff redundant due to the financial impact of the pandemic, but managed to splash out almost £80 million on players over the summer.

Last week, the club scored a PR own-goal when they spent £45 million on Thomas Partey on deadline day, the same day the news broke that they were plannign to lay off Jerry Quy, who had played mascot Gunnersaurus for 27 years.

Few would disagree that English football is in dire need of a serious reboot. After all, the current system – which already hoards the bulk of the cash at the summit – is one of the reasons why those lower down are so ill-equipped to deal with the impact of the pandemic.

However, handing all the power to an elite, out-of-touch cabal – who could later decide to reduce the support given to the EFL – is not the way to do it.