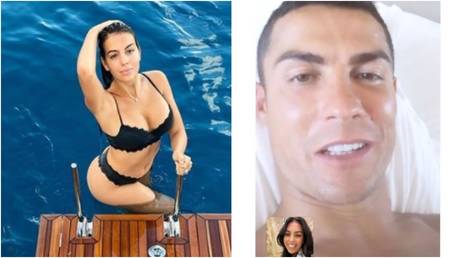 Cristiano Ronaldo’s girlfriend Georgina Rodriguez has described the Juventus star as her “inspiration” after news broke on Tuesday that the footballer had tested positive for Covid-19.

In a statement, the Portuguese Football Federation revealed Ronaldo – who is asymptomatic – had tested positive and as a result had departed Portugal’s squad to enter self-isolation.

Rodriguez, 26, sent the forward a heartfelt message on her Instagram Stories as she shared a screenshot of a video call she made to him – alongside the caption “You are my inspiration” – to her 21.4 million followers.

The pair began dating in 2016 after they met at a Gucci store in Madrid, where Rodriguez worked as an assistant.

In November 2017, the Spanish-Argentinian model gave birth to their daughter Alana Martina, her first child and his fourth after Cristiano Jr. and twins Eva and Mateo.

Rodriguez regularly posts insights of her family life with Ronaldo and the children on social media.

The couple live in Turin, having moved there when Ronaldo swapped Real Madrid for Juventus in 2018.

The 35-year-old has scored 68 times in just 91 games for the Bianconeri, helping them win their eighth and ninth consecutive Serie A titles.

As a result of his positive coronavirus test and subsequent isolation, he’ll miss at least Juve’s next two fixtures.

Juventus are due to travel to Crotone on Saturday before facing Dynamo Kyiv in the UEFA Champions League the following Tuesday.