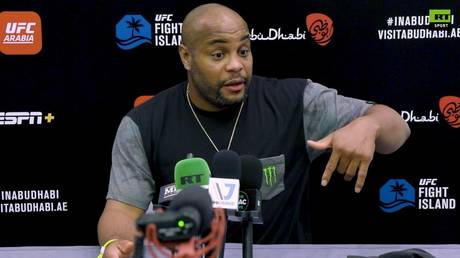 Former two-weight UFC champion Daniel Cormier says Justin Gaethje is the biggest threat that teammate and friend Khabib Nurmagomedov has faced in his thus-far unblemished career as the pair prepare to meet on Fight Island.

Khabib puts his lightweight title and unbeaten 28-0 record on the line against heavy-hitting interim champion Gaethje at UFC 254 in Abu Dhabi later this month.

Cormier, who is the Russian’s friend and long-time training partner at the American Kickboxing Academy (AKA) in California, says he believes the man known as ‘The Highlight’ will provide the sternest test yet of Khabib’s mettle.

“I think it’s the toughest fight in the division for him. Justin Gaethje is an absolute stud, they call him the human highlight and it’s true. There is no fighter in the world of sports who is more exciting than Justin Gaethje, boxing, kickboxing, martial arts,” Cormier told the assembled media including RT Sport on Fight Island.

Gaethje set up his shot at Khabib with a dominant fifth-round stoppage of Tony Ferguson back in May, in what was hailed as a career-best performance from the American knockout artist, who boasts a 22-2 record but is unbeaten in his past four octagon outings.

“The Justin Gaethje who fought Tony Ferguson in May is more dangerous to Khabib than anyone he has stood across the octagon from,” Cormier added, before praising the no less formidable qualities – and dedication to preparation – of his Dagestani teammate.

“With that being said, I’ve seen Khabib Nurmagomedov train for fights and championship fights since 2012.

“The only person that was more thorough was Cain Velasquez when he became champion back in 2010. No one worked harder, no one was more committed.

Former light heavyweight and heavyweight title holder Cormier, who now works as a UFC commentator, added: “I don’t know if anyone’s going to beat him. I’m confident and believe that Khabib will retire undefeated, he’s too committed to who he’s supposed to be to get beat by anyone.

“Justin will fight a good fight… I’m calling the fight, so I’m going to be as unbiased as I can be. But I just don’t know if anyone can beat this guy right now. There’s no 155-lber who feels that strong when he grabs you.

“Khabib tells you [what he’s going to do], but you have to stop it. That’s why Justin is dangerous, because he has the skillset to stop it. Let’s see what happens.”

Also on rt.com
‘Not even for $5 billion’: Khabib says he is ‘finished’ with McGregor as UFC champ shoots down reality TV show proposal