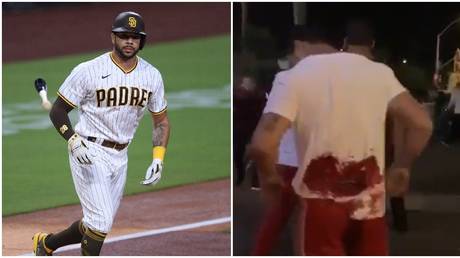 Footage has revealed the blood-soaked aftermath of a brawl which followed the stabbing of San Diego Padres’ star Tommy Pham on Sunday.

Pham was stabbed in the back outside a strip club in the city on Sunday evening, suffering a laceration 12 inches long and five inches wide, according to police, but he is expected to make a full recovery.

In a video obtained by TMZ Sports, the 32-year-old can be seen in a white T-shirt – drenched with blood from the wound that runs across his lower back – and red sweatpants while other men fight outside the Pacers Showgirls International club.

More of the brawl can be seen in further footage of the incident.

The outfielder was stabbed after he approached two unknown people who were arguing by his car as he attempted to leave the club.

He was treated by paramedics at the scene and taken to UC San Diego Health for stitches, but he did not suffer internal damage or injuries to his organs.

On Monday, Pham said in a statement: “I’d like to thank the incredible medical staff at UC San Diego Health for taking such great care of me last night. I truly appreciate the hard work of the [San Diego Police Department] as well as they continue their search for the suspects.

“While it was a very traumatic and eye-opening experience for me, I’m on the road to recovery and I know I’ll be back to my offseason training routine in no time.”

He recorded a .211 batting average in his first season for San Diego, hitting three home runs and batting in 12 in 31 games.