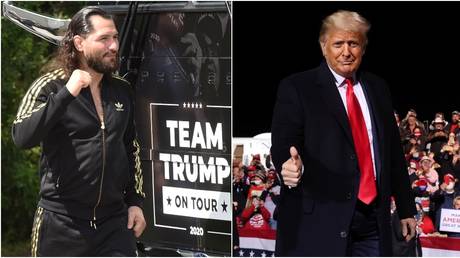 Donald Trump has lauded UFC welterweight contender Jorge Masvidal for his support three weeks out from the presidential election after ‘Gamebred’ hit the campaign trail alongside the president’s son, Donald Trump Jr.

Masvidal took part in a multi-stop tour in Florida dubbed ‘Fighters Against Socialism’ where he helped Trump Jr. campaign for the state’s Latino vote, with the tour culminating in an event at the American Top Team training facility in Coconut Creek where Masvidal outlined why he is voting for a second term for Trump rather than the Democratic nominee Joe Biden.

“The Democrats just think that they’re entitled to the Latino vote. They think that we just have to hand it over to them,” he said last weekend. “That’s right. We sure as hell don’t.”

Trump and Masvidal first became connected when Trump attended Masvidal’s Madison Square Garden fight with Nate Diaz a little under a year ago, with Masvidal saying afterwards that he was honoured that a United States president was interested in him.

And after Masvidal’s moves on the campaign trail, Trump heralded ‘Gamebred’ on Twitter early Thursday and thanked him for his support.

Much like his arch-rival fighter Colby Covington, Masvidal, who was born to a Cuban father and a Peruvian mother, has been a prolific supporter of the Trump administration in the media, frequently underscoring his loyalty to the 45th president – and saying that the Democratic Party has consistently let him and other Latino voters down.

“We either re-elect President Trump and keep America great or we let Joe Biden destroy the greatest country the world has ever seen.

“Now, I’m a professional athlete and I’ve been one for most of my life so I’ve always seen things through a sports lens. That makes Donald Trump our head coach and before the global pandemic we were winning Super Bowls.

“And when you’re winning Super Bowls, you don’t fire the coach. It doesn’t matter if you don’t like the plays he runs, the players he puts on the field, or what he says on Twitter.

“You sure as hell don’t replace him for another coach who’s been in the business for 47 years at every level and never won a f*cking game.”

The picture gets clearer as to why bill HR-44, the Ali Expansion Act, never left committee.A bill that would make promoters have to pay on the open market what the fighters are worth.Trump makes sure the bill never leaves committee.Dana gives his support and money to Trump. https://t.co/wtT4m1JTjf

However, other sections of the fight game have criticized the Masvidal-Trump collaboration. Former UFC fighter Nate Quarry, who is among those campaigning for the introduction of the Ali Expansion Act into mixed martial arts which would guarantee more robust contract negotiation measures for fighters, says that the UFC-Trump alliance is based around Trump’s willingness to kill any moves to put the bill forward.

“The picture gets clearer as to why bill HR-44, the Ali Expansion Act, never left committee,” Quarry wrote on Twitter. “A bill that would make promoters have to pay on the open market what the fighters are worth. Trump makes sure the bill never leaves committee. Dana gives his support and money to Trump.“