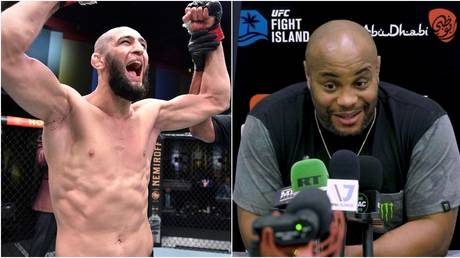 Cormier was asked for his thoughts on the unbeaten Russian-born fighter, who knocked out Gerald Meerschaert with a single punch after just 17 seconds when they met in September.

That was Chimaev’s third victory in just over two months since signing with the UFC, after his record rapid-fire sequence of two wins in 10 days on Fight Island in July.

“Let me tell you something, I’m high on this dude,” Cormier told the media including RT Sport in Abu Dhabi. “That dude right there is something else.

“I couldn’t believe what he did to Meerschaert. Meerschaert was terrified. Meerschaert said all the right things during the week: ‘I’m not afraid of this dude’ and then the fight started, he looked like a deer in the headlights.

“He’s backing up, Chimaev walks him down and just punches him upside the head. Meerschaert falls down, fight’s over. What, eight seconds? Wasn’t it like eight seconds? I mean this was the craziest fight.

“And this dude now, everybody would say stuff like: ‘Khamzat Chimaev is better at striking than he is grappling’ and I’m like ‘no way.’

“I’ve seen this guy outland people 175 strikes to five, in two fights where he just took ‘em down, and against Gerald. This dude’s a welterweight and he’s putting people to sleep like that.”

Chimaev only made the switch to UFC in July, but he has already fought three times and extended his overall MMA record to an impressive 9-0.

The 26-year-old’s UFC debut came at middleweight against John Phillips, whom he beat via second-round submission on July 16.

Just 10 days later, the Swede recorded a knockout win over Rhys McKee at welterweight, before his return to middleweight and lightning-fast stoppage of Meerschaert last month.

“Good luck with Khamzat Chimaev, at 185 or 170,” Cormier added. “I talked about [welterweight champion Kamaru] Usman and those guys having the ability to run the table for a while. If that kid keeps climbing the ranks, he’s a real problem for everyone.”

UFC boss Dana White has signaled that Chimaev will headline a card in Las Vegas later this year, but the promotion is yet to find a willing opponent.

Welterweights such as Colby Covington and Stephen Thompson have said they’re not interested in fighting the unranked Chimaev at this time, but British middleweight Darren Till offered to fight him after he has faced Jack Hermansson on December 5.

Also on rt.com
‘I’ll give you a go at the big boys!’ British UFC star Darren Till says he’ll fight Khamzat Chimaev in 2021

Asked about the possibility of Chimaev facing Till in the Octagon, Cormier said: “If he goes and fights Darren Till, we’re gonna know exactly where he stands, because Darren Till’s a bad, bad boy.”

Till is currently ranked at No. 6 in the middleweight division, and a win over No. 4 Hermansson would likely see him climb higher.

The Englishman is 18-3-1 in MMA, though his three defeats have come in his last four fights.

He suffered the first loss of his career in 2018 when he failed in a bid to take the welterweight belt off Tyron Woodley, and he was knocked out by Jorge Masvidal in a shock defeat on home soil in March last year.

A return to middleweight proved successful last November when he beat Kevin Gastelum in a split decision, but he lost to Robert Whittaker via unanimous decision in July – on the same night Chimaev beat McKee.