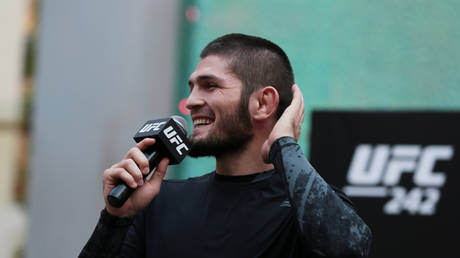 Daniel Cormier says he would relish the chance to see teammate and friend Khabib Nurmagomedov face Irish nemesis Conor McGregor for a second time, but doubts the UFC lightweight champion would ever consider a rematch.

Speaking to the assembled media including RT Sport on Fight Island – where Khabib defends his 155lbs title against Justin Gaethje later this month – Cormier revealed that he had paid $10,000 for the privilege of watching his American Kickboxing Academy teammate defeat McGregor at their infamous showdown at UFC 229 in Las Vegas in October 2018.

When the fighting spilled into the crowd after Khabib vaulted the cage to target members of McGregor’s team after submitting the Irishman in the fourth round, Cormier was among those to help restore order.

The retired former two-weight champ has admitted he would love to see Khabib and McGregor run it back, if not for the riches his friend would make from the contest.

“It doesn’t take a genius to realize that if Conor McGregor wins two fights in a row, he’s probably going to get a title fight, it’s not rocket science,” Cormier said.

“[Khabib and McGregor] sold 2.5 million pay-per-views last time, they made a boatload of money.

“Why wouldn’t I want that for my friend, to see a guy that he’s beaten? Also, I was in the arena [at UFC 229], I helped stopped the fight. But because so many people, so many celebrities wanted tickets, I paid $10,000 for me and my family to watch the fight.

“I wanted to support him as a teammate and a friend, and then I helped stopped the fight and Dana [White] gave me all my money back so I got to go for free.

“He’s one of my best friends, he’s a great guy, he’s so loyal and so loving. But if he gets to fight a guy that he beat before and make another $20 million, I’m all for it.”

Also on rt.com
‘Not even for $5 billion’: Khabib says he is ‘finished’ with McGregor as UFC champ shoots down reality TV show proposal

Cormier questioned the criticism he’s received from some of Khabib’s fanbase online for suggesting that his praise of McGregor’s fighting skills makes him any less of a friend to his Dagestani training partner, adding that he doubts a rematch would happen between the pair, not least because Khabib has dismissed the idea out of hand.

“These idiots on the internet are so stupid,” Cormier said.

“I don’t think he’ll fight McGregor again, but if I’m working for the UFC, I’m trying to put that fight together.

“But Khabib is so rich now, it’s crazy. He said they can give him the whole UFC and he ain’t going to do the Ultimate Fighter [with McGregor], $5 billion, and you know what, he means it.

“He’s as genuine a person as you’ll ever meet in the world. He’s not number one bullsh*t guy. But I’d like him to fight Conor for sure…

“Khabib’s a sweetheart, to get to know Khabib, you’re a better person for it.”

While Khabib prepares to face Gaethje at their main event at UFC 254 on October 24, McGregor is in talks with the UFC over a potential match-up with former rival Dustin Poirier later this year.

Beyond that, McGregor has suggested he will make another lucrative foray into the boxing ring to meet Filipino icon Manny Pacquiao in 2021.