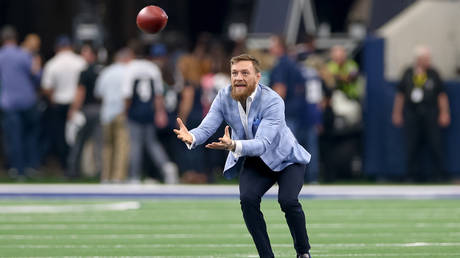 Conor McGregor has accepted UFC boss Dana White’s offer to face Dustin Poirier on January 23, but with a catch – the Irishman wants the showdown to happen at the home of NFL team the Dallas Cowboys.

Earlier this week, White said the UFC calendar was fully-booked for this year and that McGregor and Poirier would have to wait until January for a rematch of their 2014 meeting, which the notorious Dubliner won via first-round knockout.

White’s offer ran counter to McGregor’s initial insistence that he was only interested in facing off with Poirier in November or December, but the former two-weight champ has now given ground on the date while inserting his own caveat on where the event should take place.

“I accept, Jan 23rd is on! My goal is to see this fight take place in Cowboy stadium. Proper Style!” McGregor tweeted.

“[Cowboys owner] Jerry Jones is a friend and the stadium can hold our crowd. I will be ready for Texas and Texas will be ready for my fans! Then Manny,” the Irishman added, referring to his plans to step into the ring to face Filipino boxing icon Manny Pacquiao next year after he has fought Poirier in the octagon.

I accept, Jan 23rd is on! My goal is to see this fight take place in Cowboy stadium. Proper Style! Jerry Jones is a friend and the stadium can hold our crowd. I will be ready for Texas and Texas will be ready for my fans! Then Manny. #McGregorSportsandEntertainment

Poirier soon gave his agreement, before inquiring what weight the two would meet at.

It remains to be seen whether McGregor’s wish of holding the fight at the Cowboys’ AT&T Stadium in Arlington is deemed feasible by the UFC.

McGregor and UFC boss White have endured strained relations in recent weeks after the Irishman shared private message exchanges between the pair while outlining his frustrations at being sidelined for much of 2020.

McGregor last fought in January, earning a 40-second victory over Donald ‘Cowboy’ Cerrone in Las Vegas, but then announced he was retiring from the sport in June, citing a lack of excitement at the opportunities available to him.

Somewhat predictably he has since reversed that decision, first declaring that he would be facing Pacquiao in the ring next year and then arranging a contest with Poirier which was initially planned as a charity sparring event outside the auspices of the UFC.

McGregor has still pledged $500,000 to Poirier’s Good Fight Foundation charity, and has said he sees Poirier’s southpaw stance as the ideal preparation for his bout with Filipino eight-weight boxing champion Pacquiao.