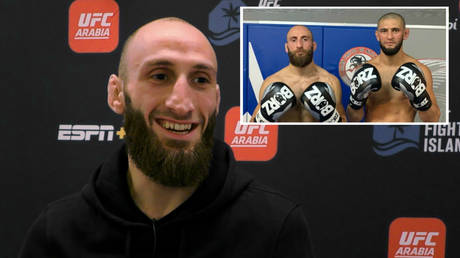 Guram Kutateladze makes his UFC bow this weekend on Fight Island and will be hoping to make the same explosive impact in the promotion as his friend and training partner Khamzat Chimaev.

Kutateladze has stepped in as a short-notice opponent to face fellow UFC debutant Mateusz Gamrot, after Russia’s Magomed Mustafaev was forced out of their lightweight bout.

Georgian-born Kutateladze heads to the octagon on an eight-fight winning streak earned in various promotions including BRAVE CF, but will be competing for the first time since November 2019.

With him in Abu Dhabi is friend and teammate Chimaev, alongside whom he trains at the Allstars gym in Stockholm, Sweden – the country in which he is now based.

Speaking to RT Sport on Fight Island ahead of his bow this weekend, the 28-year-old Kutateladze discussed the journey which had led him to this point.

“I was waiting for a [UFC] shot for quote a long time, and I was ready to go in and show myself any time,” he said.

“My manager called me and said that [UFC official] Sean Shelby called us, and we’re in and we’ve got a chance, we took it straight away of course.

Standing across the octagon on Yas Island will be the undefeated Gamrot, who arrives in the UFC as a KSW lightweight champion.

Rather than shirk from the challenge posed by the Pole, Kutateladze said he will relish it.

“I’m very happy, that’s the kind of opponent I need, he’s undefeated too so this is perfect for my rankings and my resume,” he said.

In Kutateladze’s corner will be Chimaev, the man who has a hype train of his own firmly in motion following his three wins in just over two months after arriving on the UFC scene.

Chimaev forged his name with two of those wins in the space of 10 days on Fight Island, and although any association with the man of the moment will inevitably bring added attention to Kutateladze, he says he is comfortable with it.

“I don’t really pay attention, I just do my thing, do my job, what I live for and what I train for. This is not my job to pay attention to it,” he said.

“I know Khamzat for three years, we met in the gym, he moved to Stockholm, to Allstars, I came there for my training camp, I don’t remember which fight.

“We did some good, hard sparring together. After that we clicked. We lived together almost in the same room, in the gym, training together, eating, talking, recovering together.”

Given his close proximity to Chimaev, Kutateladze said he was not surprised by his rapid rise.

“About his amazing performance, I’m not surprised. He deserves it and works super hard for where he is now. It’s not the limit, there’s much more to come.”

Kutateladze’s own journey took him from Georgia to Russia – where he took up jiu-jitsu at the age of five – and then on to Sweden.

He put his peripatetic background down to various factors, from financial to political.

On arriving in Sweden he was first based in Lund, outside Malmo, where he trained, worked and lived at a gym – often in spartan conditions.

“I was working there as an instructor, living in the gym, slept on the mats for 2-3 years maybe and holding classes, and if something needed to be done I did it, fix something, paint, a lot of garden work,” he said.

“At the same time I had to train, my main thing is my career, but at that time I had my two losses in my career, they are from that time because I didn’t have any coach, any team, I was pretty much training myself and working 14, 15, 16 hours a day. But after that I found Allstars and after that things started falling into place.

Kutateladze has a ready-made example in the form of Chimaev of what can be achieved in a short space of time in the UFC, and when asked if his friend had offered any advice ahead of is debut, the response was typically succinct: “just smash everybody.”

Chimaev has certainly done that so far; on Fight Island this weekend, Kutateladze will begin his attempts to do exactly the same.