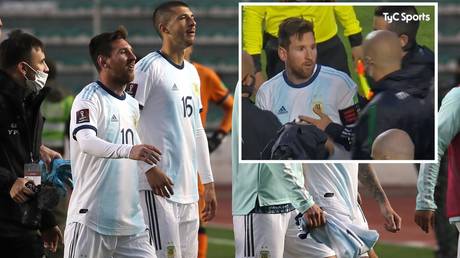 The Bolivia physio at the centre of an angry post-match row with Argentina star Lionel Messi has played down the argument, but revealed he has received abuse as a result of his involvement in it.

The Albiceleste skipper and his Bolivian counterpart Marcelo Martins Moreno were both booked for a heated row after the final whistle as Argentina beat Bolivia 2-1 in La Paz on Tuesday, with physio Lucas Nava also a target of Messi’s anger.

“There was probably a misunderstanding,” Nava said, per ESPN. “The truth is that nothing happened, it’s more what was created around us.

“There are normal insults that any Argentinian uses, there was no bad intention. What happened was that the game finished, I saw that there could be a possible brawl and I tried to separate our players so that they wouldn’t be sent off.

“When you are part of your team you need to defend them. It hurt me that my son had to listen on TV that this and that about the bald [man]. I have had calls from everywhere, even from Spain. I’ve received insults and threats.”

Footage captured the argument between Messi and Nava, who is also from Argentina.

The Barcelona talisman is said to have accused Nava of “screaming for the whole game” and he was also allegedly heard to shout “what’s your problem, baldy?” at him, as well as using an insult which referred to Nava’s mother’s anatomy but which can also be translated to “son of a b*tch” or “motherf*cker.”

Aside from being upset at his son seeing discussions about him on television, Nava has taken the incident in good humor.

Messi’s Argentina teammate and close friend Sergio Aguero – who did not feature in the match because of a knee problem – wrote on Instagram that Messi should have given him “a slap on his bald head.”

Nava said he thought the post was “hilarious” and added: “I take the memes with humor as it’s part of the football folklore.”

Also on rt.com
Bolivia out to ‘eat the liver’ of Lionel Messi and Argentina in World Cup qualifier at 3,600 meters above sea level

Being Argentinian himself, he isn’t holding a grudge against Messi over the insults either: “As a supporter of the [Argentina] national team, there’s no one bigger than him. He is No. 1. My son’s middle name is Lionel because of him.”

Messi is La Albiceleste’s record goalscorer, having found the net 71 times in an Argentina shirt. He also has 140 caps for his country and needs just seven more to equal Javier Mascherano’s record.

Argentina came from behind to win 2-1 on Tuesday courtesy of goals from Lautaro Martinez and Joaquin Correa, after Moreno had fired the hosts in front at the Estadio Hernando Siles, which sits roughly 3,600 meters above sea level.