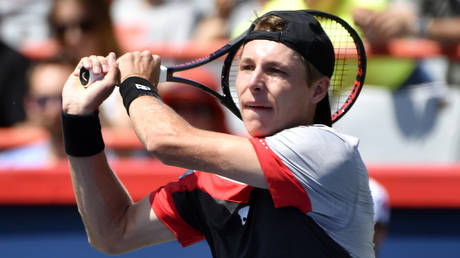 Belarusian tennis player Ilya Ivashka had an epic on-court meltdown during his match at the St. Petersburg Open after he was slapped with a code violation while having an emergency toilet break.

Ivashka won the first set against Frenchman Adrian Mannarino, but was trailing 2-3 in the second when he requested an emergency toilet break.

“But you need to be as fast as possible. You’re on your own time,” the umpire, Richard Haigh, warned him as he left the court.

Upon returning from a toilet break Ivashka was informed that he had been docked a service game due to a delay of game violation.

The player, who was shocked by the penalty, exploded at the umpire, telling him that an emergency break couldn’t lead to point deductions.

“This one was an emergency because I couldn’t stand on the court. If you wanted me to sh*t on the court, I could do it,” the player fumed.

The match official insisted that Ivashka’s bathroom break exceeded the allowed time by “three times,” prompting the umpire to penalize him for the delay of the game.

The heated debate between the two intensified as the Belarusian player shouted and swore at the official, who warned him of further penalties if he continued to argue.

When the game finally resumed, Ivashka returned the break and went on to  win the match on a tie break 7-6 to progress to the second round of the tournament.