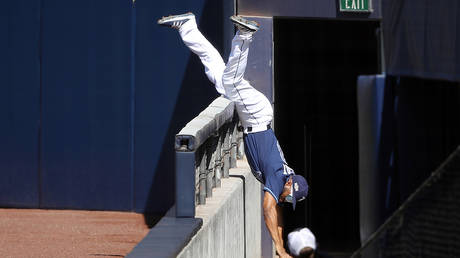 Baseball fans were left in awe on Monday after Manuel Margot of the Tampa Bay Rays produced a stunning catch, having already hit a three-run home run earlier in the game.

The 26-year-old likely thought his game had peaked when he handed the Rays a 3-0 lead over the Houston Astros in the first innings with a 406-foot home run at Petco Park – the third homer he has managed in the postseason after hitting just one in 47 regular season games.

However, he successfully chased down a hit from George Springer in the second innings, launching himself over a wall to make an incredible catch.

Fans reacted in disbelief, variously describing his effort as “one of the greatest plays I’ll ever see” and “one of the all time great catches in the postseason.”

Others also paid tribute to the outfielder, while one fan even dubbed the contest the “Manny Margot game.”

That was one of the greatest plays I’ll ever see.

That’s gotta be one of the all time great catches in the postseason.

It isn’t the first time Margot has wowed fans with a spectacular catch at Petco Park, having also done so there whilst playing for the San Diego Padres.

His efforts helped Tampa secure a 4-2 win over the Astros to take a 2-0 lead over them in the American League Championship Series.