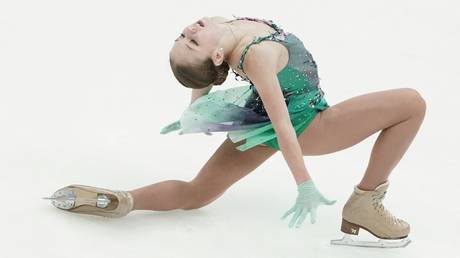 Russian quad-jumping sensation Alexandra Trusova, who confidently won the second stage of the Cup of Russia, says she has a more intense training schedule under her new coach with more emphasis on skating and artistry.

The 16-year-old split from renowned coach Eteri Tutberidze in May and moved to Evgeny Plushenko’s academy in an attempt to improve her results which nosedived last season during which she failed to win any major tournament.

Explaining her decision to switch coaches the first female skater to land a quad, Trusova, said she wanted to be trained by Plushenko who himself landed numerous quads during his illustrious skating career.

Trusova’s debut under her new coach turned out to be more than successful as she not only won the second stage of the Cup of Russia, but also landed three quads and a triple axel.

Despite having visible errors on landing a quadruple Lutz and a triple axel the skater was satisfied with her performance outlining that she will continue working on her jumps.

“I have always enjoyed learning and landing difficult jumps. Jumps are still my favourite elements in figure skating. But now I really like skating, we have been working hard on improving my skating,” Trusova said.

“I have regular training sessions and in addition I have individual training. We even tried pairs skating with my coach Dmitry Mikhailov. But honestly I don’t understand how athletes skate in pairs. I have been working hard on my skating skills trying to improve aspects of my programs,” she added.

The skater said that her main goal for the season-opening competition was to land a triple axel which she did in her short program making a noticeable error on her landing.

Trusova who was third after the short program erased the deficit in scores to finish first at the Cup of Russia beating two Tutberidze’s skaters Kamila Valieva and Darya Usacheva.