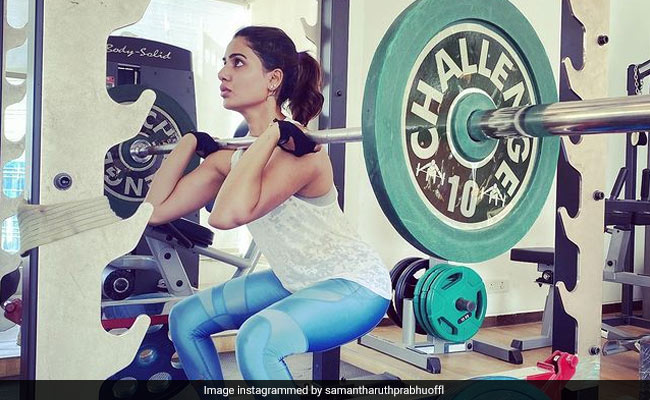 Samantha Ruth Prabhu, who is a fitness enthusiast, set the workout mood right on Thursday with her latest entry on Instagram. The actress, who lives in Hyderabad with husband Naga Chaitanya, posted a picture of herself from her gym diaries and it is giving her fans major fitness goals. In the photo, which has now gone viral on social media, Samantha Ruth Prabhu can be seen lifting heavy weights. She can be seen sporting a white gym tank top and blue tights. Sharing the photo, Samantha wrote nothing and just accompanied it with a bicep emoji. Reacting to her post, south actress Ruhani Sharma left a fire emoji in the comments section.

Samantha Ruth Prabhu’s fans are also all praise for her workout picture. They dropped comments like “amazing” and “so strong” on her post.

Samantha Ruth Prabhu’s Instagram feed shows her love for workouts. During the nationwide lockdown, she even practiced more yoga asanas, pictures of which she shared on social media. The caption on one of her yoga posts read: “Apart from gardening… something I’ve been really enjoying is Yoga especially because and I do it together Chaitanya… #mytimewithyou #couplesyoga…Chay isn’t in this picture but I am working on it.”

Samantha Ruth Prabhu will next be seen in Tamil film Kaathuvaakula Rendu Kaadhal. The film will also star Vijay Sethupathi and Nayanthara. She will also feature in the second season of Manoj Bajpayee’s web-series The Family Man.

Recently, speaking about her role in the series, Samantha told news agency PTI: “I worked very hard for this role and it tested me both physically and emotionally. I am looking forward to season two.”

Milan’s Ibrahimovic out of action for two weeks | Football News

Liverpool will not have 11 fit players without changes, warns Klopp | Football News