Diljit Dosanjh thanks all his fans for stepping out and watching ‘Suraj Pe Mangal Bhari’ in theatres amid the pandemic: ‘Dil se Shukria Hai’ | Hindi Movie News

By ZBT Team on November 17, 2020
Punjabi singer turned actor Diljit Dosanjh took to social media to thank all his fans for showering his recently released film ‘Suraj Pe Mangal Bhari’ with love. Not only that but he also appreciated them stepping out amid the pandemic to watch the film in the theatres. 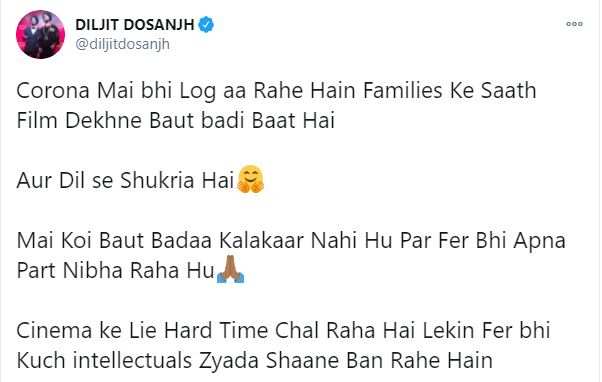 The film which is helmed by Abhishek Sharma also stars Manoj Bajpayee and Fatima Sana Shaikh in pivotal roles. Despite a slow start at the box office ‘Suraj Pe Mangal Bhari’ which is the first new film to release in theatres after the long break has received a good response from the critics.